Welcome !
Hello!
My name is Kalgina Natalia I live in Angarsk near to well-known lake Baikal !
I a veterinary, expert RKF, the instructor on training. I now the president of Club "Olkhon".
On this site I want to tell about dogs and delution of my favourite breeds - the Giant schnauzer and  Miniature schnauzer . 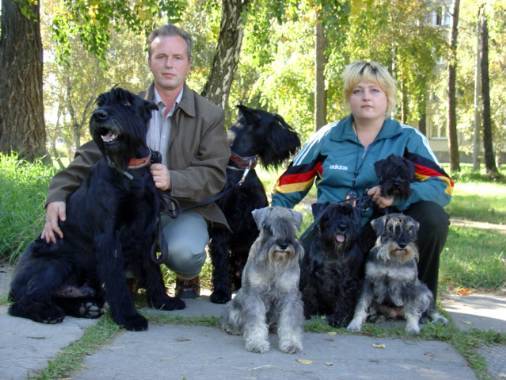 For the first time the riesenschnauzer I have got acquainted with breed in 1983 and had an opportunity through Angarsk club DOSAAF, to communicate with owners of this breed of that time. Here have ended rates of the instructor - traning, the Instructor on breeding delution, the judge. Has acted and has stopped with the red diplom Irkutsk State Farm - technical School by a trade the veterinary medical assistant. Then I have acted and have finished the Moscow Veterinary Academy it. Skryabin on a speciality a veterinary. For this time I have stopped repeatedly in Moskovsk city club DOSAAF the head then Kats M.A. was.
Has got acquainted with huge of fine experts of cynologists of that time of Moscow. For the first time has seen and has taken a great interest in breed the Russian black terrier and many years then was breeding already in Angarsk in delution of this breed. In 1992 I have returned to Angarsk and began to work in Angarsk city club ROSTO all over again as a livestock specialist, and then and the chief of club till 1997. In this season I have finished the next rates on the hunting dog breeding in Irkutsk at club " Russian hunting ", breed has got acquainted with the aficionado of breed the riesenschnauzer Bykovym Gennady at that time experienced both rises and falling, but not looking on it Gennady has brought to Angarsk from nursery
"Gloris " ( breeder Seliverstova O.A.) Class dogs - the first was his favourite - Ch.Rus, 3х CACIB multi Champion Gloris Hesperus (in honour of it his nursery " ot Chernoy Zvezdy " has been named) and 5 more dogs with prefix "Gloris" have appeared in our city. Long time and now we closely cooperate with "ot Chernoy Zvezdy ".
Since 1997 we have organized Club ADOOLZH "Olkhon" and 15 years I head it.
My own first Giant schnauzer has appeared in 1998 - magnificent Ch.Rus, 2х CACIB, BIS, 9xBISVet
Gloris Admiral ,  then Ch.Rus,2xCACIB Gloris Oskar  has casually appeared . 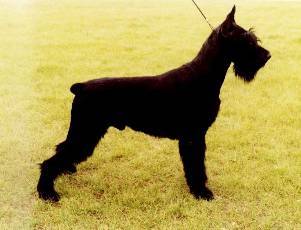 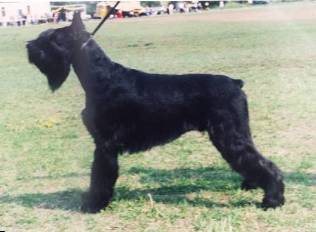 Gloris Admiral
Gloris Oskar
Mini schnauzers have got to me too due to Bykovu Gennady and Olga Seliverstovoj. During trip to "Eurasia" I have seen at it dog pepper/sol  and black and after that something has clicked in my heart ! In 1998 in my house remarkable dogs - black Gr.Ch,Ch.Rus,ChClub Gloris Keep In Tuch and pepper/salt with salt Gr.Ch,Ch.Rus,Ch.Club Gloris Littl Laprikon which became founders of my delution tiny mini schnauzer. 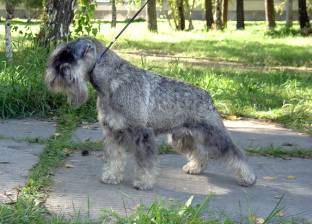 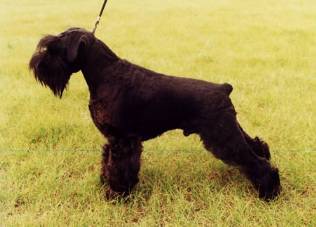 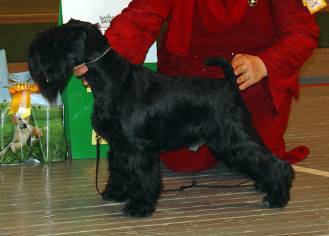 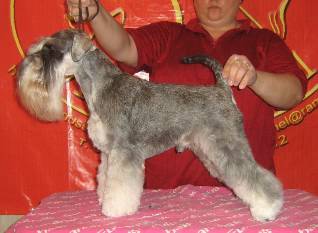 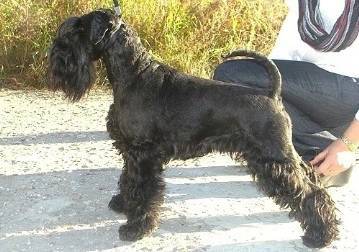 Talisman Rezlark
In November, 2009 after correspondence of expectation I became the happy owner of the pepper/sold boy from fine Swedish kennel  "Myltans" - Young Champion of Russia , Champion of Russia. CACIB  Myltans Jackpot . Thanks big Maria Landgren for the trust rendered to me! 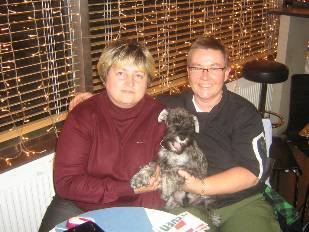 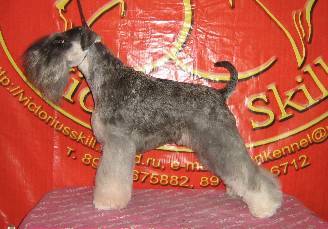 We with Maria in Stockholm
Myltans Jackpot
In the spring of 2011 came from the nursery "Rezlark" pepper wonderful boy - Young Champion of Russia , Champion of Russia Orpheus Rezlark  I am very grateful to Larisa Rezkova for the excellent quality dogs from her kennel ! 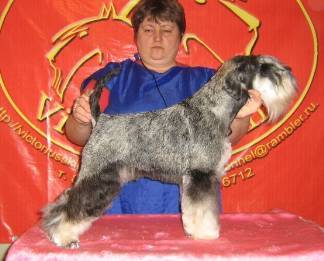 Orpheus Rezlark
In the autumn of 2011 and early 2012 in my nursery appeared very promising completion of a remarkable young men kennel "Gloris" : black Giant Schnauzer - Gloris Mark Avreliy
and pepper Mini schnauzer -  Champion of Russia, Champion RKF, CACIB  Gloris Narcissus. He arrived as an adult, immediately became a favorite in their new home. Despite this, he confidently and effectively started his show career! I am very grateful to Olga Seliverstova for the trust and the ability to have in our kennel such a beautiful  Giant Schnauzer and Miniature Schnauzer ! 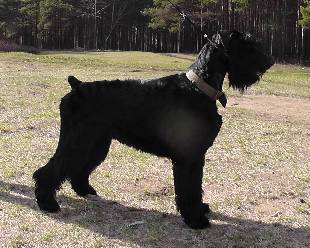 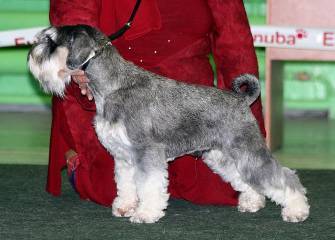 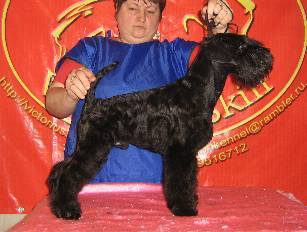 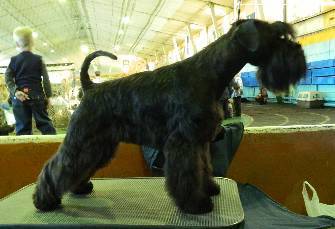 Tiger  Hermes
Uriah Heep iz Kupchino
On this site you can get acquainted with my dogs and breeding my favourite breeds -
the Giant schnauzer and Mini shnauzer.
Welcome !
* Home * News * Our dogs * Puppes * Champions * Fotogallery * Links * Contact *